In 2006 I wrote this song and made this video for Mr John Otto Cleese to coincide with the World Cup.

You know – THE World Cup – the FIFA World Cup. Football. The game played with the feet. By the whole world.

Didn’t do too badly. 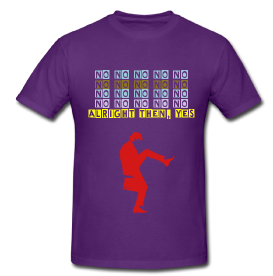 We’ve been busy working on producing John Cleese’s new videos, to be released via his Headcast website on June 7th 2009, and also the internet campaign which surrounds the launch.

As well as video production which includes animation, music composition, sound and graphic design, our work also includes a new shop featuring authorised merchandise, World of Cheese, and a revamped email list, dubbed the John Cleese Nigerian Lottery which as John points out on Twitter, you don’t have to be Nigerian to enter. 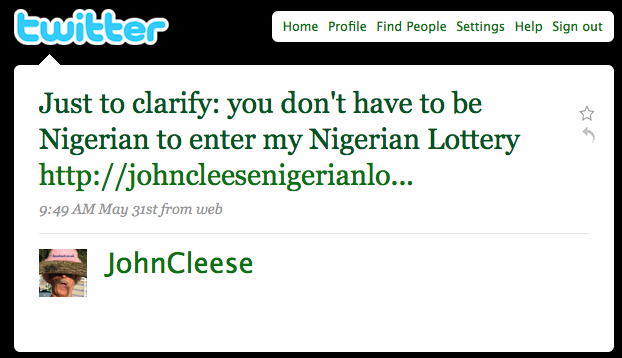 John Cleese’s fondness for the written word means that he tends to value diligently prepared scripts – as Eric Idle tells here. So it’s nice that John is starting to use video in this more intimate spontaneous way, with the able assistance of Garry Scott-Irvine whose numerous organisational tasks now extend to cameraman. Therein lies a tale of mastering the short form and being prepared to chase chickens in your pyjamas.

This kind of video is perfect for video blogs (or “vlogs”). Small Pictures maintains John’s blog at Cleeseblog.com. Using Vimeo as well as old-school podcasting (downloads delivered by RSS, available in iTunes and other podcast aggregators) also means that people can view the video in very good quality without necessarily being able embed in other sites, or download and re-post against the wishes of the client. Vimeo’s PLUS (pro) option gives great control over functionality and permissions of online video, and also allows HD to play on remote sites, for a price.

Up Close to a Big Event, the Paris internet conference LeWeb ’08 including behind the scenes video, parties, Christophe Delire, and interviews with Loren Feldman, Ewan Spence and Charlie Schick from Nokia, Dennis Howlett, Nicole Simon.

LeWeb Up Close, Part 1 from Small on Vimeo.

LeWeb 08, Paris – the major annual international internet conference on European soil, attempting to be a beacon of hope in the wreckage of a stalled economy, costing 1m euro to stage, presenting a host of international names, A-list sponsors, a start up competition, demo rooms, after-show parties and visits from a famous author and a French government minister.

Day one was a struggle in many respects. The assembled had no internet, no WiFi, and the strain was palpable, as online presentations ground to a rusty halt.

There were glazed expressions on many faces at the end of the first morning, the geeks clinging tightly to their mobile devices, retaining their precious, flickering connections to the promised land. To make matters worse, the heating failed and people shivered in the vast conference hall.

Still, there was coffee, breakfast pastries, and lunch, although the portions were small, as were the tables. The desperate throng had literally to be held back from the food by presence of sharp-eyed caterers and the looming glare of security guards until the allotted time of 1.30pm.

Accompanied by a Franco-Mexican trio, it was a truly surreal feeding frenzy. Blood was in the water, and those higher thinking functions – internet, code, commerce – counted for nothing in the lust for nutrition.

This for me was the most riveting spectacle – geek sharks battling for sustenance.

Vinvin from Seesmic enjoys a tour of John’s Californian cottage.

Watch this in HD on Vimeo.

This was a rather nice job taken on at short notice – producing a video of a short poem by Bréon Rydell, on chilly but sunny Westminster bridge. 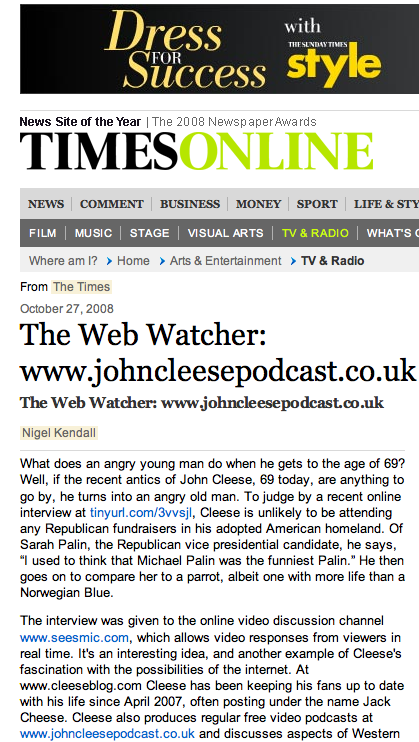 Nice coverage of our recent online video work with John Cleese and Seesmic from Nigel Kendall at the Times – does coverage from the Guardian, the Telegraph and the Times constitute a full house?

This piece includes a comment on the timing of John’s recent ads for some banks which have fallen foul of the great financial tsunami:

One of the great comedy clichés is that the secret is in the timing, and Cleese is a master. Ponder, for instance, his timing of a recent series of commercials for Kaupthing (tinyurl.com/6fecxu). It’s the biggest company in Iceland, he tells us. Not any more it isn’t. Kaupthing was one of the biggest casualties of the recent global banking collapse. We can only hope that Cleese’s similar commercial for the Polish bank BZ WBK Commercial, at tinyurl.com/5khe4h, was more successful. As he heads into his eighth decade, he’s clearly planning for the medical attention he may need by his ninth. Happy birthday, Mr Cheese. He’s from Santa Barbara via Weston-super-Mare, you know.